STAMPS: This week sees the launch of a new set of BIOT stamps: the literary issue. They celebrate famous British writers and the well known characters they created:

You can buy these stamps and their First Day Covers from the BIOT Post Office online: http://www.biotpostoffice.com/index.asp

First Day Covers cost £2.88 and stamps are priced at 54p and 90p and can be bought individually or in sheets of 20.

COINS: A new coin for the Territory has also been launched: the £2 Archipelago and Wildlife coin. The design features an image of native wildlife of British Indian Ocean Territory consisting of a Turtle, a Red-Footed Booby Bird and some Angel Fish. The Outline of Diego Garcia Island is shown in the background. The obverse of the coin features an effigy of Her Majesty Queen Elizabeth II.  The coins are produced exclusively by Pobjoy Mint.

It is available in silver or cupro nickel from Pobjoy Mint: 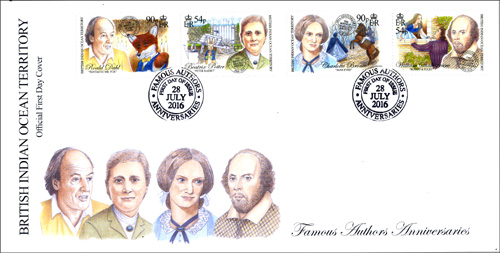