Common names for this species include “Coastal glider”, “Wandering pennant” and “Cora’s pennant”.

It is a medium sized dragonfly and, as suggested by various common names, undertakes migrations and may be nomadic. As such, it is very widespread across its range, occurring across Asia and Australia.

The image shows a male with its vivid red colouration. Females have an orange / yellow coloured body with the same brownish-coloured eyes as the male.

A small dragonfly native to Asia and Australia, this species is relatively common on Diego Garcia and is often found perched in a sunny spot.

The image on the stamp shows a female, with its yellow/brown colouration. Males are blue, hence the common name.

The only damselfly in this stamp edition. Common names for this species include “Pygmy wisp”, “Wandering midget”, “Pygmy dartlet” and “Wandering wisp”.

Their native range is across Asia and Australia.

The common name for this dragonfly is the “Vagrant emperor”. It is a migrating species following the monsoon winds.

It has a wide native range from the Afro-tropical regions, through some of Europe and across central and southern Asia.

The female is pictured on the stamp. Males look similar to the females, but the blue patch on the thorax is much brighter.

The common names for this species include the “Common picturewing” and “Variegated flutterer”.

It is a medium-sized dragonfly found across Asia. Due to its weak fluttery flight and bold wing colouration, it is often mistaken for a butterfly.

A female is pictured showing the transparent part of the front forewing, which distinguishes them from the males. The forewings of males are yellowish with dark spots / patches and dark wing tips.

It is a large dragonfly with a strong flight with a range across Asia, Australia and Pacific Ocean islands.

Further information about BIOT stamps and how to purchase them can be found here. 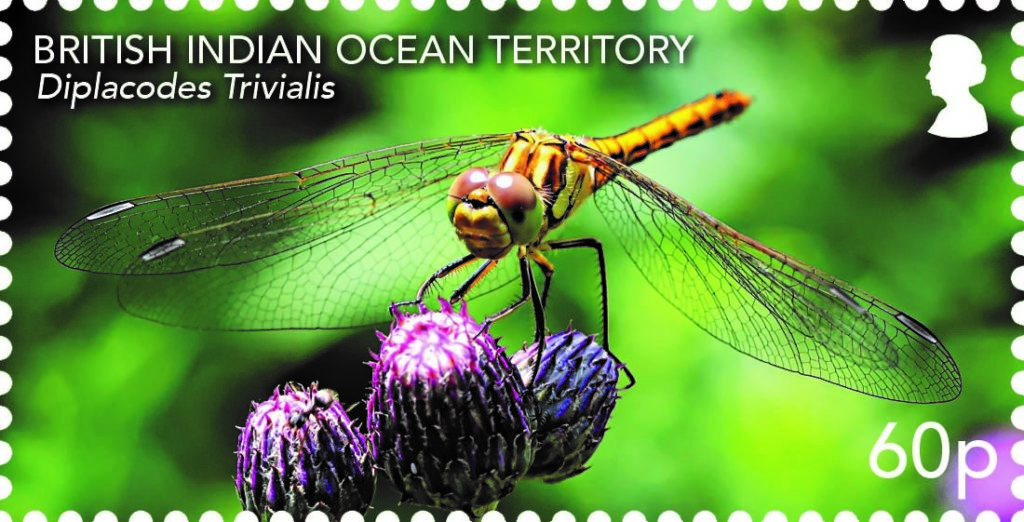