On 2 May 2018, the British Indian Ocean Territory Administration is releasing a set of six stamps and a first day cover portraying a variety of flowering plants: these are all species that are native to the Territory.

The plants featured are: The Chagos Archipelago is a large and isolated atoll complex, dominated by coral reefs, and with over 50 small islands. These islands were re-formed from coral sand and rock after the last ice-ages. Freshwater is found within this matrix of sand and rock, which is how the first plants were able to take root. Over time, soil built up on these land patches, enhanced by organic debris brought in from the sea and from bird droppings. This soil then supported new seeds and spores, which also arrived by wind, sea and from seabirds. Tropical temperatures and consistent rainfall year-round has enabled the few plants that reached these islands to flourish, forming dense forests, with tall hardwood trees in many areas. Even so, the overall diversity of native plants is low.

Further to this, from the end of the 18th century, BIOT was colonised and coconuts became the mainstay of a plantation economy. Many forests were cleared and the islands planted with coconuts. Harvest was continuous and every year around 5 million coconuts were produced from Diego Garcia alone. Whilst coconuts are natural on the shores of the islands in the Archipelago, when the plantations were closed in the mid-1900s, the cultivation broke down and coconuts grew densely across entire islands, blocking out the light for other plants species.

The BIOT Administration is working hard to restore native habitats by felling coconut trees on several sites and planting key native species including Barringtonia asiatica, Cordia subcordata and Calophyllum inophyllum, all of which provide important nesting sites for seabirds. Plants and trees on tropical islands are not only important to terrestrial species but are also essential to many marine species. Large trees shade beaches, providing favourable conditions for nesting turtles. The trees provide nesting platforms for birds. Red Footed Boobies prefer to nest on branches of trees that overhang the water, as this allows for unobstructed take-off and landing. From these nesting birds comes nutrient-rich guano, which falls and seeps into the marine environment creating an abundance of marine plankton. Species that depend on plankton as a food source (such as Manta Rays) are then naturally drawn to these areas to forage. 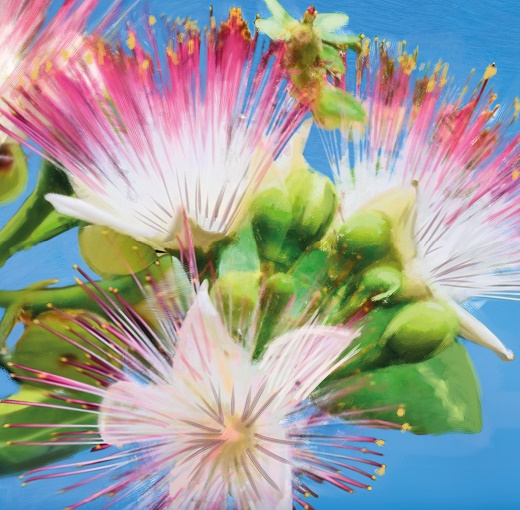