The British Indian Ocean Territory (BIOT) was formed on 8th November 1965. It is one of 14 British Overseas Territories. There is no permanent population in BIOT, but Diego Garcia, the largest of the 58 islands hosts a joint UK-US military facility.

The Territory is currently administered from London, with a Commissioner appointed by the Queen, who is assisted by a Deputy Commissioner and Administrator. The key posts are currently held by:

In the Territory itself, the civilian Administration is represented by a Royal Navy Commander, who is appointed as the Commissioner’s Representative (known locally as “BritRep”). As well as being the highest civilian authority in the Territory, this person is also the Officer commanding the British Forces in Diego Garcia. The post is currently held by Commander Colvin Osborn.

The constitutional arrangements for BIOT are set out in the British Indian Ocean Territory (Constitution) Order 2004 and related instruments. The 2004 Order gives the Commissioner power to make laws for the peace, order and good governance of the territory. As with any other British Overseas Territory, BIOT is constitutionally distinct and separate from the UK, with its own laws and Administration.

A series of UK/US agreements set out in Exchanges of Notes regulate matters relating to the use of the Territory for defence purposes, such as jurisdiction over military and other personnel. These originate in 1966 and provide for an initial 50 year period of US use of the Territory, plus a further 20 years. The agreement was “rolled over” in 2016 and will now expire in 2036.

The BIOT Gazette is an official document published by the Government of the BIOT to chronicle the appointments of BIOT officials, note the legislation extended to BIOT and publicise Ordinances signed by the Commissioner.

The BIOT Coat of Arms 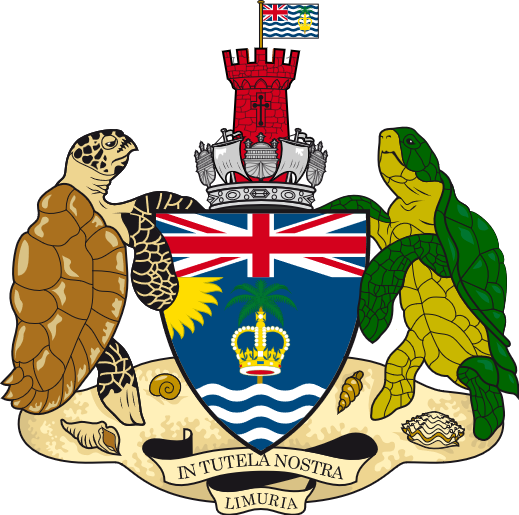